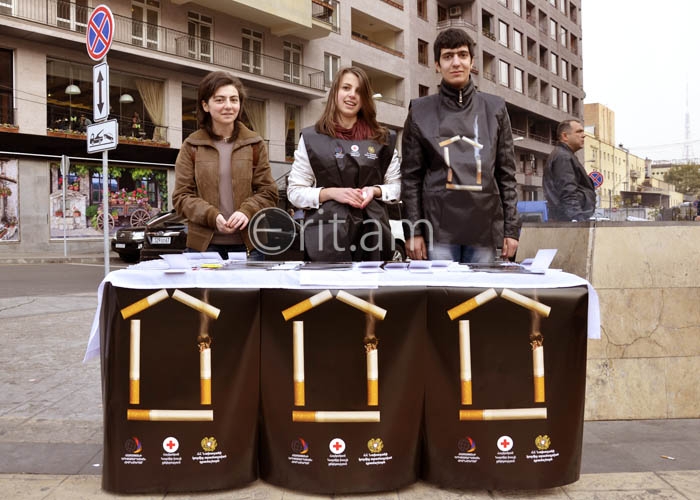 In November 2013 ARCS implemented "Yerevan without tobacco” project funded by the RA President and the Armenian Youth Foundation grant.
The aim of the project was to raise public awareness on the harmful consequences of tobacco, to reduce the number of smokers. In the framework of the project in 10 schools of Yerevan city ARCS conducted specially designed sessions on smoking dangers for 1,000 students aged 13 - 14. Information materials also were distributed, drawing contest was organized.

In order to increase public awareness, special social ad was developed and broadcast, information banners were placed in social networks.

21 November, 2013 was declared as a No smoking day in a number of countries and thematic text massages were sent to cell phone subscribers in order to inform about the Day. On the same day, at 16:00 in the square at the building number 5 in the North Avenue, Armenian Red Cross Society, conducted a public event under the slogan "Choose your own path" in the framework of the "Yerevan without tobacco " project.

That day on North Avenue 2 pavilions with special decorations were located, presenting the life with the devastating consequences of tobacco and without.

ARCS volunteers were informing the passers about the smoking dangers, by providing them with informational materials, encouraging them to throw cigarette butts in the appropriate boxes. For that they were awarded with sweets.