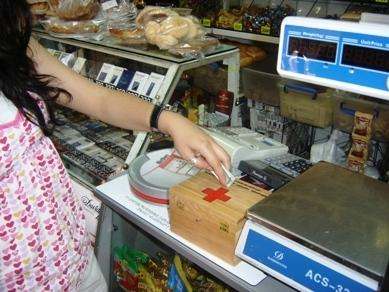 The program goal is to build capacities of RB/TB staff and volunteers in the directions of communication with local potential donors and authorities as well as to promote ARCS resource mobilization and fundraising activities.  In the framework of the Resource Mobilization program, Complex activities were realized aimed at developing the fundraising and communication skills of the RBs, and at disseminating ARCS and fundraising.

Six RBs have been involved in the program since 2009: Armavir, Vayots Dzor, Syunik, Gegharkunik, Sevan and Aragatsotn RB/TBs. Workshops and trainings were organized for the staff and volunteers of the above mentioned RBs on the topics of Resource mobilization and Communication. Needs assessments were realized in their communities by the RB/TB staff in cooperation with the local authorities and the most vulnerable groups were highlighted. Meetings took place with the local potential donors and the authorities. During the meetings with the ARCS management and the heads of Administrations of the regions involved in the program, the cooperation framework was discussed and the possible joint actions were pointed out to draw the attention of the local organizations to the needs of community.

Humanitarian projects were realized in the targeted regions in cooperation with the local authorities targeting the vulnerable groups stated at the result of the needs assessments. This led to the establishment of communication with Mass Media and local organizations in regions. Complex activities were organized for the Mass Media representatives, such as round tables, dissemination seminars, etc.

Besides the activities in the regions, the project also suggested a number of activities for fundraising and communications, such as placement of charity boxes in the shops and at the halls of the airport, making jewelry out of beads and participating in the exhibitions, lunches and meetings with potential donors and seminars and breakfast-meetings with the media people, etc.

The achievements of the program can be measured by the number of established long-term partnerships, such as ones with Ashtarak Kat LTD, Orange Armenia and Vivacell-MTC and cooperation with “Zvartnots” International Airport, etc.