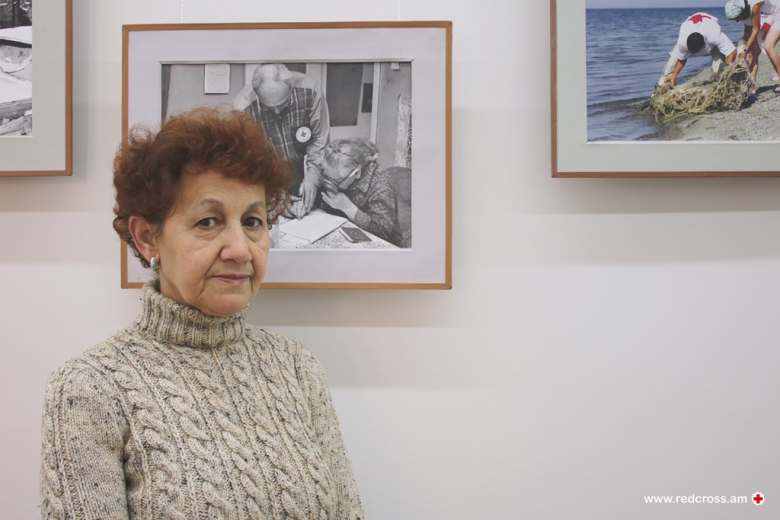 One phone call from the Red Cross was enough to be invited and warmly greeted in Zvart Barsumyan’s small house. She was ready to tell her and her son’s story.  The first thing you notice is, that despite of hardships and difficulties, Mrs. Zvart is full of optimism; looking far away with eyes full of sadness and hope, she repeats in sweet Wester Armenian: “Everything will be fine”.

After the war in Syria, started from 2012, many Armenians fled to Armenia, leaving behind all they hag earned and created during their lives.

In 2013, Mrs. Zvart’s son started his studies in one of Universities in Armenia, she had planned to join him with his husband in a year, but  he suddenly died. She arrived in Armenia alone.

Mrs. Zvart was very active women, she loves art and music, and was a member of number of cultural centers in Alleppo, for example of “Zvart” choir. She was very close to her national roots, and it made easier her cultural integration in Armenia. But the economic side of the process was not that easy, and here the Red Cross was the first to support her. Mrs Zvart was a great cooker, like many other Syrian Armenian women, who had never worked before.  Now, the new circumstances, made her to think of using her abilities to ensure her stable income. She applied to Armenian Red Cross Society and received microwave oven and refrigerator, which gave her an opportunity to start her small business.

When the  (“Increased Resilience of Syrian Armenians and Host Population” (IRIS) Programme launched in July, 2018, which is leaded buy Austrian Red Cross and being implemented in consortium with Armenian Caritas, SME Cooperation Association, Centre for Coordination of Syrian Armenians’ Issues, Mrs. Zvart benefits also from housing support ( in the frames of the project 100 families receive 100 EUR monthly).

“The Red Cross is my family, I love these guys and ladies, their care, love and support, their smiles and shining eyes are precious, you feel that they are honest and kind. Thanks God, the Red Cross doesn’t forget us”, she says.

Her son is now MA student in Polytechnic University, he is a software engineer. Even though he has good career perspectives abroad, they do not plan to leave the country.

“I can not imagine living in any other place, than Armenia. Money is not the most important thing in the world. The most important is Humanity.  Sometimes people forget about that, when they live hard life. But I am sure, that everything will be fine”, she assures.

This woman, who loves art and reading, and believes in better future, dreams only to have her own home and see her son living happy, because everything will be all right.