''There are good and uniquely good people, ''grandmother Roselia 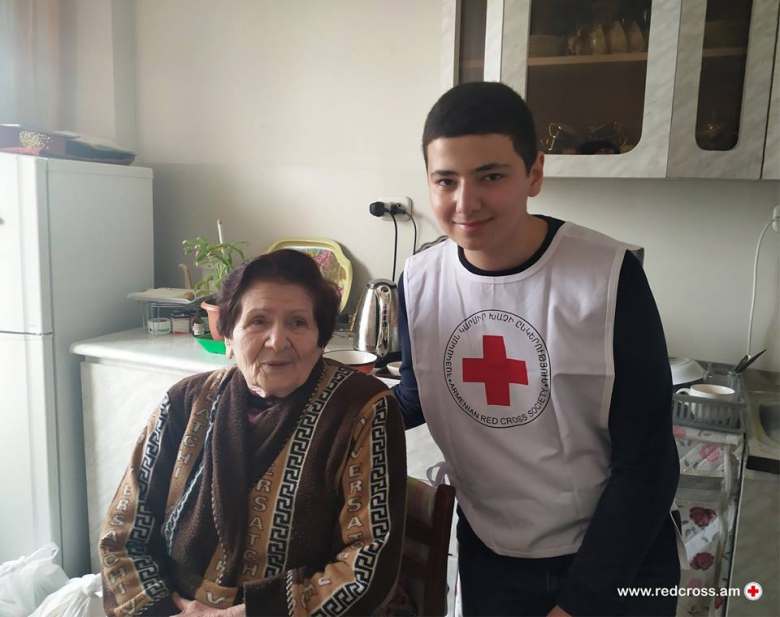 The dormitory, where we went, had 8 floors and the elevator wasn't working. In the long, narrow and dark corridors, people live and share their everyday life side by side, each of them having their own story. Many of them are elderly- the refugees.

Bringing the bags of food to the rooms, our volunteers were not returning empty-handed, all of them were treated with candies and, because of it, their eyes were shining. One of our volunteers Gayane, given candies, says that while working with the elderly, they receive more than they give.

So we went to Mrs. Roselia's house, she hadn't managed to come to take the help, as she had walking difficulty. The door was open. We went in, and the first thing our eyes caught was the tidiness and neatness of Mrs. Roelia's house.

She says, speaking Russian: ''I know only the Karabagh dialect, but I don't know the literary Armenian and it hurts me so much.''

The grandmother Roselia is refugee from Baku and has been living here for long years. ''My mother and father were from Artsakh but we lived in Azerbaijan, I went to a Russian school there.''

Hardships hadn't stolen the kindness and human features from Mrs. Roselia. Everything is temporal, humans must stay humans, she says.

There are no bad people for her, '' there just are good and uniquely good people.'' That's the answer she gave to characterize the volunteers of Red Cross.

Roselia used to be a doctor. She loves reading and keeping the house clean. People need long conversations, warmth, and just human contact.

'' It's not only the food and hygiene tools, that Red Cross gives us. Talking to the Red cross volunteers, their warmth and kindness are more important," concludes Mrs. Rosalia.